1 year on Empire Avenue – What is it?

I have completed 1 year on Empire Avenue today and still many ask me what exactly Empire Avenue is. Just to make it simpler; its a Personal Branding Tool that evaluate your activity on the popular Social Media Platforms. In detail here is a blog post for your understanding: Empire Avenue is a virtual stock […] 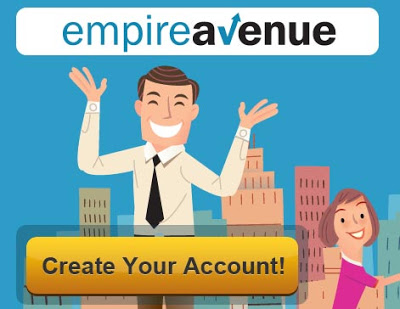 I have completed 1 year on Empire Avenue today and still many ask me what exactly Empire Avenue is. Just to make it simpler; its a Personal Branding Tool that evaluate your activity on the popular Social Media Platforms. In detail here is a blog post for your understanding:

Empire Avenue is a virtual stock market that detects your social capital online. It started as an invitation-only closed beta in February 2010. It was then additionally launched to the public in July 2010. The concept helps invest on a Social Stock Market. This means that you identify things of interest to you and then invest virtual currency on it. Thing that interests you could be anything online, and anyone online too. It is popular mainly for its ability to evaluate your Social Media Power which accounts all your Social Media profiles, your popularity and engagement on the same.

Its about ‘You’ as a stock!

All you do is add value to it and trade each interest, using virtual money. As stated earlier, the worth of each item of interest (or in the real world what we call ‘stock’) will be a direct result of the user participation on social networks such as Facebook, Twitter, and LinkedIn.

When you invest on something that is of your interest, and others also find it interesting, it results in directly adding more like minded friends to your list automatically. Additionally, the element of your interest also grows and gets further reach with time.

Once you join Empire Avenue and connect to the social network account the score will be based entirely on the activity and the engagements that your site or the site you are interested in gathers. It will be a value-based relationship. This will be directly valued unlike options of following people or liking a page.

The virtual currency is called Eaves. These Eaves can be earned every time you use the social network sites. You could chat with a friend on Facebook, post links, update photos or files to your profile or write a blog; all of these can earn you Eaves. Therefore, even if other people don’t really contribute to your site, just you working on it will be converted as investment to your own value.

Empire Avenue has been received by the public with a lot of mixed feelings. There are those that swear by this concept and another side that says this game trivialises people and interests by adding a direct value, virtual as it may be, to all of them. Despite which side of the discussion you may be on, the truth is that this concept exists and is growing. So, for now it seems like a concept that is materializing into tangible results.

Do not forget Personal Branding is potential marketing tool nowadays. Klout and PeerIndex in the past has helped us showcase our popularity on web with figures and percentages. Empire Avenue helps you with same and allows you to benefit out of your peers popularity as stocks.

My 1 year on EA had been fascinating initially, boring in between as it didn’t carry many of my known individuals, it is eventually growing interesting with increasing popularity. This site is must recommended for all you Social Media Enthusiasts.