10 Reasons Why You Should Invest in Twitter Advertisements in India

In September 2015, Indians got access to Twitter advertisements in much easier way! Earlier, you could only advertise on Twitter by identifying a suitable advertisement partner and allocate about 6.5 Lakh INR for a quarter! Now, Twitter gives you the opportunity to run Ads for as less as 100 INR! Earlier we had worked with […] 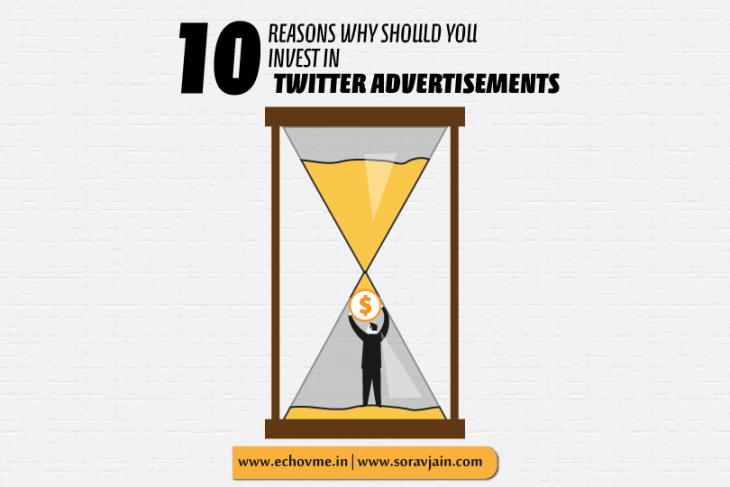 In September 2015, Indians got access to Twitter advertisements in much easier way! Earlier, you could only advertise on Twitter by identifying a suitable advertisement partner and allocate about 6.5 Lakh INR for a quarter! Now, Twitter gives you the opportunity to run Ads for as less as 100 INR! Earlier we had worked with Komli Media to get the ads rolling but now we are helping brands directly by accessing the dashboard from our end. You can do that too and you can define your budget as well. Here are some 10 solid reasons why in India you should invest in Twitter Advertisements.

We had about 17 Million Twitter users in 2014 in India & an estimate of 22 Million users was made for 2015. This number when compared to 125 Million Facebook Indian users is very less but the type of people you will usually find on Twitter are niche, highly affluent and many of them are influencers.

People on Twitter usually shop looking at experience of other people especially during the sale / holiday period. As per Twitter India almost 283 Million Tweets happened during the holiday period in 2014 and that’s a lot!

2. Different Objectives Can Be Achieved:

Increase Followers: To increase the follower base of your Twitter profile.

Tweet Engagements: Helps you make your content reach to the desired audience and drive conversation. As a result you will see increase in replies, favorites and RTs.

Website Clicks and Conversions: Through Website click ads you can send people to your website and also add a conversion pixel code on the thank you page of your form to check the conversions achieved.

App Install or App Engage: To help increase downloads of your mobile application or increase the engagement of the same. You will see the advertisement along with ‘install’ button. You can promote an iOS or Android App.

Video Views: Get people to watch your video using Twitter’s native video. Your video thumbnail is auto-expanded in a user’s timeline and plays back with one click.

3. You Can Generate Leads Without Having A Landing Page with Lead Gen Cards:

This is an interesting advertisement feature! Leads are what drive your business in converting a prospect to customer. With the One click Lead Gen Ad, just a couple of clicks and users can share their information with you which you can follow up to call and convert them for your business.

4. Helps You Pick The Stream Where You Want To Drive Your Audience:

Twitter gives you the option to choose your target according to keywords, page visitors or to those who share similar interests as your page. This means, you can personalize your message as per the audience you are trying to target! The broad way in which you can target your audiences are:

Follower targeting where you target followers of a certain page to gain more followers.

Device targeting where you can pick and choose the audience who use a specific device such an iPhone or a Lenovo phone.

Behavior targeting helps you reach audiences based on their behaviors such as shopping and spending trends.

Tailored Audience targeting where you can use a tailored list from your database or CRM data to reach a niche audience on Twitter.

Keyword targeting where in you can reach people who have used specific keywords in their tweets recently.

Geography targeting where you can choose to show your Ads to a wider base of audience – be it around the world or specific countries. You can also narrow it down to a city, town or even a region.

Language targeting in which you can target people who understand a particular language.

Gender targeting to help you pick out the gender in case your product/service serves to just one set.

Interest targeting helps you to serve your Ad to those on twitter whose interests closely align with what you are selling.

5. Freedom To Build Your Own Audience:

6. You Can Promote A Handful Number Of Tweets:

Yes! This is possible. Gone is the model where you had to pay a kidney worth’s money to twitter create an Ad account. You can now, set up an account with Twitter for Ads and start with a budget as low as Rs. 100/-.

7. You Can Schedule The Tweets Which Have To Be Promoted:

While promoting your tweets, twitter offers you the luxury of scheduling tweets you want to promote! So if you are on the move and do not have the time to promote a tweet, simple! Schedule it.

8. You Can Trend Your Hashtag:

Want people to take notice of your brand or new release of a product or service? Trend your hashtag on twitter and ensure you get your eyeball time. The payment for this is hourly. Where as you are charged for trending the hashtag on an hourly basis!

With more and more people spending more time on their phone viewing content, it makes more sense that brands run video ads for your audience. A video Ad on Twitter has known to pulverize viewers’ purchase intent by 28% than those who watch it on the television during a 22 minute program [Neilsen]. Video Ads on twitter come with an Auto Play feature where the video plays without the audio. Once the viewer clicks on the Ad, it moves into a full screen mode with audio. To make things sweeter, twitter charges you only after your video has been opened in full screen mode and viewed for 3 seconds or more. Isn’t that convenient?

Twitter supports MP4 & MOV file types and the maximum time length for a video 10 mins. Keep your video size within 1GB. You will have 116 characters to compose a tweet for the video so we suggest you keep it crisp and to the point.

Let’s look at some captivating Ads we have seen on twitter so far:

Ex. 1: Datsun India’s Ad is clean and crisp with the image and the text clearly stating the intent and purpose. 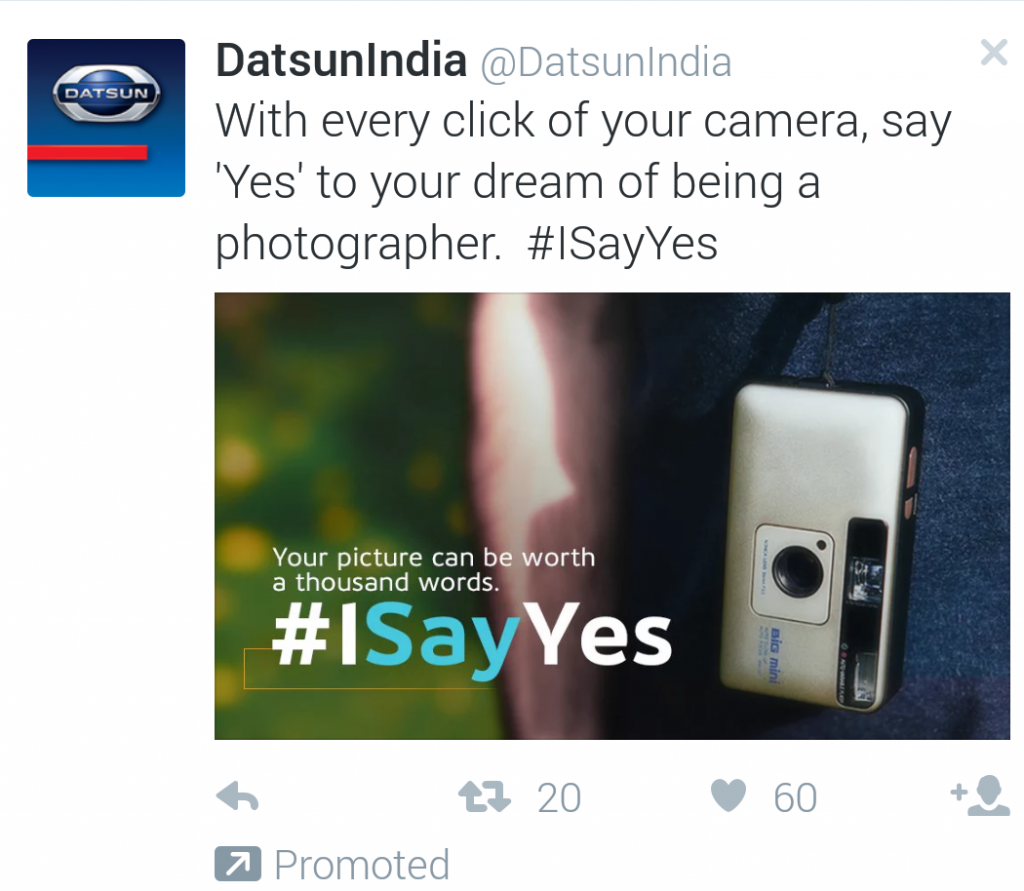 Ex. 2: The below Ad comes on the right side of the timeline. The purpose of this Ad is to encourage followers to follow you. 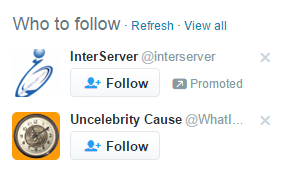 Ex. 3: Go minimal and use only characters to convey your brand message. 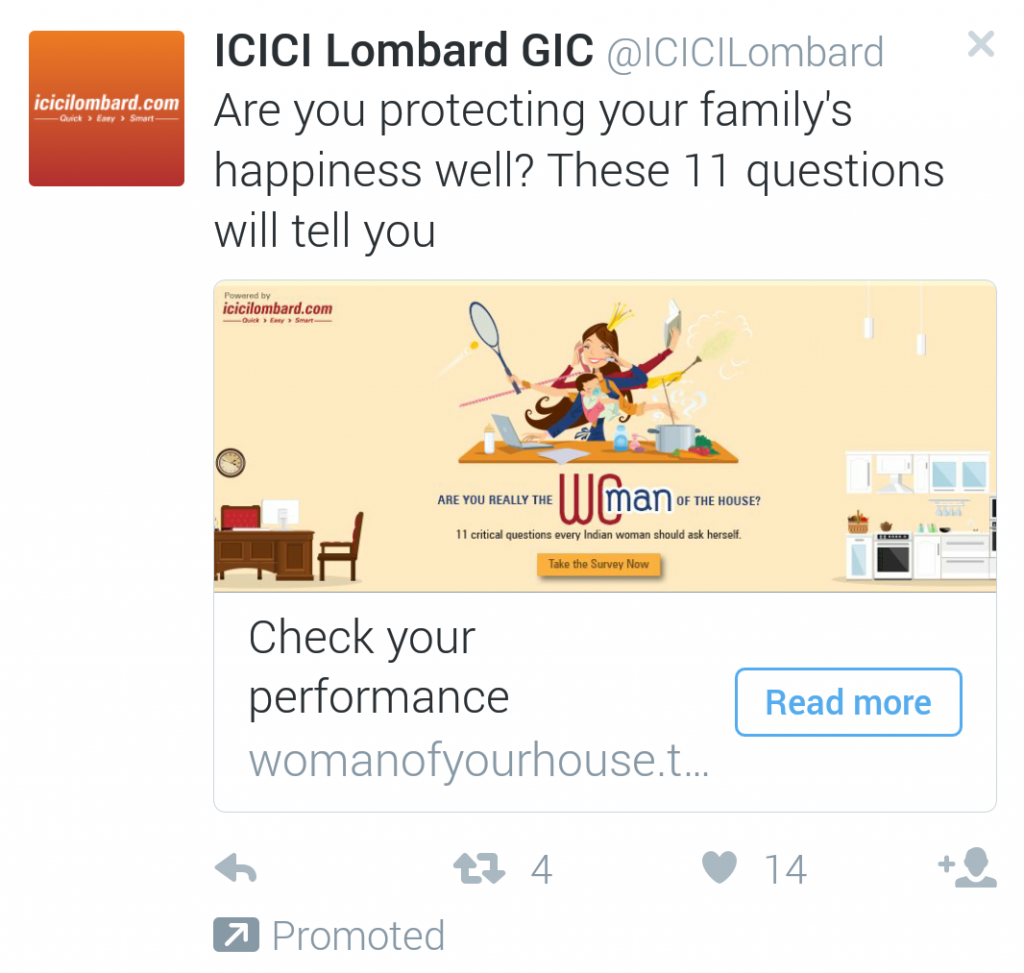 Twitter Ads analytics is pretty comprehensive and gives one an in depth understanding of the campaign run. Following are the parameters that are measured by twitter:

This article was contributed by Malavika – Social Media Manager, at echoVME under the guidance of Mr. Sorav Jain