Digital Marketing Stats and Facts of The Tamil Nadu Elections 2021 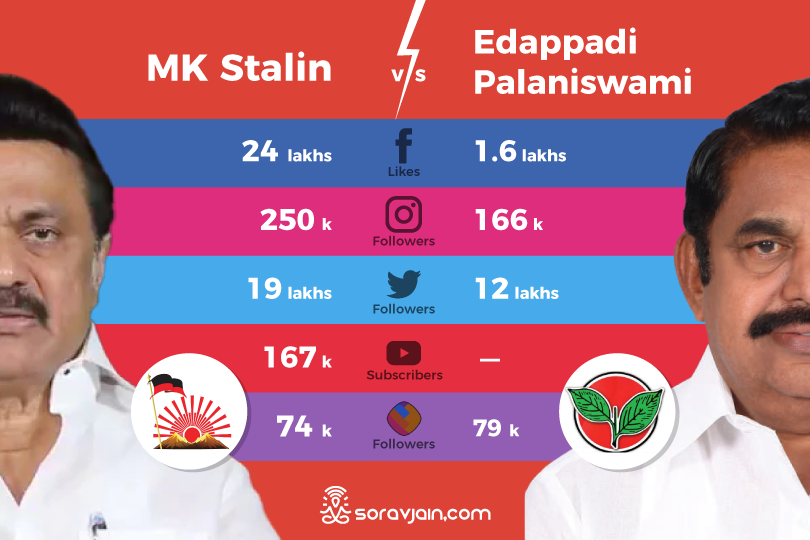 The political season is here again, and all the parties are bringing their best foot forward in campaigning and promoting. 2020 was a year where people realized the power of Digital and political parties were no different. This time around, we saw a great interest in online campaigns, promotions, and ad investments.

Be it the party pages or the minister’s individual pages, the online activity in the last few months has increased, and we have some very interesting numbers to look at. So let’s check who’s leading the Digital front, who is spending the most on ads, and who is talked about the most in the online space!

DMK Vs AIADMK: Who is Winning The Digital Number Game?

In terms of the overall followers and reach on various Social Media Platforms, the ruling party, AIADMK, is lagging, both in terms of the growth of the party pages and the accounts of the ministers. Stalin has almost 100k more followers than E. Palaniswami and uses his reach the right way. Apart from posting about rallies and speeches, he Live streams his election campaigns and regularly posts IGTV videos which garner great traction.

In terms of the overall followers and reach on various Social Media Platforms, the ruling party, AIADMK, is lagging, both in terms of the growth of the party pages and the accounts of the ministers. Stalin has almost 100k more followers than E. Palaniswami and uses his reach the right way. Apart from posting about rallies and speeches, he Live streams his election campaigns and regularly posts IGTV videos which garner great traction.

They Tweet quite frequently, with about 35 to 40 tweets a day, most of which are in regional languages. Even in that space, Stalin and DMK are leading compared to AIADMK.

While these parties are contesting on Social Media, the other major candidate, Kamal Haasan’s Makkal Needhi Maiam, leads by example in terms of the right Social Media practices.

All the parties’ content strategy is pretty straightforward, covering all the rallies, speeches, and interviews. Apart from that, E. Palaniswami does many Tweet-based Instagram posts that give him quite a good traction.

All the parties’ content strategy is pretty straightforward, covering all the rallies, speeches, and interviews. Apart from that, E. Palaniswami does many Tweet-based Instagram posts that give him quite a good traction.

AIADMK also posts engaging posts, where they encourage people to comment and interact with their Social Media and keep them in the positive limelight at the same time.

The content style on YouTube is different for each party. AIADMK on YouTube posts well-produced videos about the welfare activities they have focussed on during their time as the ruling party. These are well-produced video testimonials of laymen talking about how the AIADMK’s rule has been very beneficial to them personally and their district and how they have worked hard towards uplifting the community there in all walks of life.

Apart from this, they post videos comparing the chief ministerial candidates of both AIADMK and DMK, Mr. Edappadi K. Palaniswamy and Mr. M.K. Stalin, respectively, to treat and tackle issues. For example, the video here highlights how Mr. Palaniswamy treats festivals and people belonging to different religions in comparison to how Mr. Stalin. The video has a strong voice-over and places a somewhat direct attack on Mr. Stalin’s insensitivity towards other faiths.

AIADMK also posts content about DMK’s pitfalls, criticising the shortcomings of the party and its rule. Some videos talk about how DMK has indulged in ‘Katta Panchayat’ where the verdict would favour the side with more money, how the party has ill-treated women and indulging extensively in rowdyism, and more. As for content related to their party, they post videos highlighting the party’s achievements during Mr. Palaniswamy’s rule.

DMK is going heavier on digital compared to AIADMK this election season. They are extremely active on the platform, posting anywhere between 10-15 videos per day.

DMK released their election jingle projecting M.K. Stalin as the hero of Tamil Nadu’s people and highlighting his ambition for Tamil Nadu’s people on their official channel “Ondrinaivom Vaa”. The video has 55,077,479 views to date and aims to capture the Tamil language and people’s emotions.

They have a solid digital strategy, dominating YouTube by releasing back-to-back videos about issues, and have smartly dedicated one video to address each issue exclusively.

Their content mainly talks about social issues, including youth employment and empowerment, the woes of underprivileged communities, and more. Most of the videos are professionally shot, have an emotional appeal, and narrate stories to move the viewer. These videos are shot and posted majorly critiquing the ruling party and their shortcomings.

DMK has also posted a series of short videos featuring their chief ministerial candidate M.K. Stalin talking about what the party will do if they win the elections and come to rule the state. Each short video talks about one issue that the party will handle with ease and sort for the people. This series is posted under the hashtag #வென்றேதீருவோம்.

Apart from this, they post videos of their rallies and speeches across various districts around the state. At the end of the well-produced videos, Mr. Stalin appears and delivers a monologue highlighting how the state has seen a steep decline in different areas over the last ‘10 years’, directing at the current ruling party, the AIADMK.

DMK has made use of every form of advertisement possible on YouTube to make sure they leave no stone unturned while also pushing people to view Stalin as the best choice there is. DMK uses different cuts of their song shortened for ads while also putting to use the different short videos made addressing the various issues surrounding the people of Tamil Nadu for promotions. Every video has M.K. Stalin featuring and delivering a monologue of promises if elected the next chief minister of Tamil Nadu.

Seeing this, AIADMK, which was playing safe up to a point, released their own song titled ‘Vettri Nadai Podum Thamizhagam’ and incorporated it in videos by the party. With this, they also started going a little intensive on YouTube, producing videos featuring their chief ministerial candidate Edappadi K. Palaniswamy.

Top 5 video strategies used by both parties include:

YouTube as a platform is used by both parties to extensively promote their respective campaigns and take a dig at the opposition in their way. While the ruling party AIADMK takes an overt dig, the DMK does the same in a subtle and well-produced manner.

Over the last 3 months, DMK was one of the heaviest spenders, with more than 10,00,000 invested in ads from December 31. And the number increases to 66,68,801 when we take the last 2 years into account. Apart from generic posts and videos, DMK also promoted all of their events, rallies, and their mobile app.

There wasn’t any ad data available for AIADMK’s or BJP-TN’s page; however, MAIAM was utilizing the ad space very effectively. They were promoting all the video ad campaigns that were well shot and well made. To date, they have spent more than 4.5 lakhs on ads.

The data shown is only from the official party pages, which is just a few lakhs. There must be many more subsidiary pages that might be spending crores in total for the promotion, the data of which is hard to track down.

In the Google Ads space, both DMK and ADMK are going head to head to fill as many ads on the screen.

On Twitter, few hashtags that worked really well for DMK were more inclined towards negative marketing. Hashtags like #Stalin2021 #WeRejectADMK did well across all the Social Media channels

AIADMK did not leverage many hashtags in their posts. But one hashtag, #AIADMK, was commonly used throughout.

While BJP-Tamil Nadu isn’t targeting any specific Hashtags, MNM uses quite a few hashtags in all their posts. MNM leverages hashtags on Twitter, Instagram, and even on Facebook.

Website DA score refers to the quality of the website. The more, the better. DMK’s DA score is 59 and is much higher than its competitors, and is updated constantly. There is a Facebook and Twitter integration widget that updates every time there is a post on the respective platform. It also gives news highlights and video snippets from daily rallies and interviews.

On the other hand, AIADMK’s website has a DA score of 9 and is not that responsive. It has quite a few bugs and isn’t updated regularly.

Not just that, even offline, DMK is telling people that their online sentiments and concerns about the state are being heard. This is put across in a very effective way by this humorous cartoon on The Time of India that tells things that might happen when other parties come to power.

The search result, ‘DMK’ on Amazon, pops out Merchandise related to the party and can be bought to show support. Shirts, flags, badges, veshtis, and few other items are available with their logo and party theme on it. However, AIADMK lags with no official merch on the platform. Kamal Haasan’s MNM also has their line of T-shirts, badges, hoodies, and shorts to choose from.

All brands have their own way of communication. While some thrive on talking about their positives, others leverage negative marketing. DMK seems to be leading on most fronts, while MNM is silently and effectively making their mark. AIADMK may not follow the right Social Media practices, but they are consistent on all the platforms. Which party do you think has made the most impact?