Social media is not just a social instrument of communication. It is not all about people sharing ideas and thoughts with other people. It is the creation and exchange of ‘User Generated Content’. The ability to transform broadcast media monologues into a social media dialogues that spread, sometimes, faster and wider than television, radio or […] 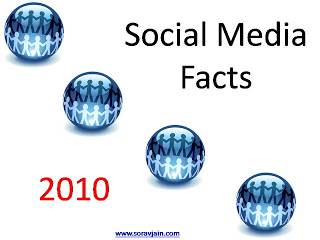 Social media is not just a social instrument of communication. It is not all about people sharing ideas and thoughts with other people. It is the creation and exchange of ‘User Generated Content’. The ability to transform broadcast media monologues into a social media dialogues that spread, sometimes, faster and wider than television, radio or print. Social Media when compared to year 2009 shows a fantastic growth in terms of people participation, penetration, user-ability, business and more.

Now, we are almost at the end of year 2010, and therefore it is time to study and understand some of the Social Media facts and trends that were evolved and followed over the year. Scouting through the web has brought together the following list of Fascinating Social Media Facts. Most of these facts are based on surveys (online or offline) over a sample size, these are also mentioned to ensure that we get the perspective of each of these facts.

1. Australia has the most number of established users of social media in the world, followed by USA and UK.

2. In terms of the impact of social networks on advertising, word of mouth is the popular option with 78% of customers trust peer recommendations on sites. While, only 14% trust advertisements.

3. Advertising has also been impacted greatly because of social media with only 18% of traditional TV campaigns generate a positive return on investment.

4. Facebook, Blogspot followed by Myspace are the top sites visited by under 18s.

5. An average user becomes a fan of 2 pages every month.

6. 24 out of the 25 largest newspapers are experiencing declines in circulations because the news reaches users in other formats.

7. 25% of search results for the world’s top 20 brands are linked to user-generated content.

8. *In a sample survey of 2884 people across 14 countries, 90% of participants know at least one social networking site.

10. * In a sample survey of 2884 people across 14 countries, users of social networking sites are saturated. Connected people feel no need to further expand their membership on other social network sites.

11. * In a sample survey of 2884 people across 14 countries, on an average, users log in twice a day to social networking sites and 9 times a month on professional websites.

Online sample survey of 2,884 consumers spread over 14 countries between the age of 18 to 55 years old by Online Media Gazette.

15. If Facebook were a country, it would be the world’s 3rd largest country.

16. An average Facebook user spends about 55 minutes a day on the site.

17. An average Facebook user spends about 6.50 hours a week on the site.

18. The average Facebook user spends 1.20 days a month on the site.

20. There are over 900 million objects that people interact with (pages, groups, events and community pages)

21. Average user is connected to 80 community pages, groups and events

25. **Over 300,000 users translate the site through the translations application.

26. **Over 150 million people engage with Facebook on external websites every month.

28. **There are over 100 million active users accessing Facebook currently through their mobile devices.

Online sample survey of 2,884 consumers spread over 14 countries between the age of 18 to 55 years old Online Media Gazette.
Statistics from Facebook press office.

31. ** 24 hours of video is uploaded to YouTube by users every minute.

40. ** One in five bloggers updates their blogs every day.

44. ** More than half of all bloggers are married and/or parents.

• ** Statistics from Technorati’s State of the Blogosphere 2009.

52. **More than 600 million searches happen on Twitter every day.

55. Of the 60 million users of LinkedIn half of them are from outside US.

54. By March 2010 Australia alone had over 1 million LinkedIn users.

56. 80% companies use LinkedIn as a recruitment tool.

59. ** LinkedIn has executives from all Fortune 500 companies.

65. **73% of Wikipedia users edit Wikipedia because they want to share knowledge.

71. Over the last first year of Foursquare, it has more than half a million users, 1.4 million venues, and 15.5 million check-ins.

73. * Foursquare is growing 75% faster than Gowalla each day.