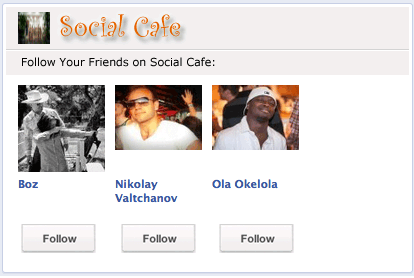 Facebook has just announced a new feature that will allow you to follow new users from within the social network’s apps. The way it works is simple: You happen to be in an app (maybe a quiz?) and come across a person whose activities you’d like to subscribe to – just press the follow button. From then on, that person’s updates for that app start showing up in your news feed.

But here’s the interesting part: Like most of the features released by Facebook, the “App Follow” is double-edged, and may not appeal to everyone. Here are the major things good and bad about this.

Here’s how it looks integrated in one app:

Click one of those buttons and you’ll be alerted on Facebook that you’re following someone via your Timeline’s recent activity.

Developers who are already publishing stories back to Facebook via Open Graph about who you follow, like Quora for example, have 90 days to either stop publishing their custom “follow” actions and migrate to this new official one, or stop publishing those kinds of stories.

So there we have it, the bitter and sweet taste of Facebook’s latest tweak. What are your view about this? Let me know in the comments!