Social Media World Forum at London – Should be Fascinating! 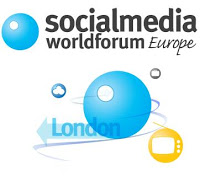 For people who aren’t aware how to run a social media campaign on facebook and who would want to explore the Web 2.0 world from different perspectives (politicians, marketing, viral campaigns, awareness, branding, Social Media ROI, future of Social Media etc) can take part in the Social Media World Forum London to be organized @ Olympia Conference Centre on 15 – 16 March 2010. The 2 days event hosts forums, exhibitions, seminars and lot more interesting stuff.

The workshops are helpful to those in internet marketing and new media and Workshop partners include: Facebook developers, Viadeo, Social media Monday, DMA, Immediate Future, Real Wire, among others.

What else would a Marketer ever dream for? Free event + networking opportunity at a gobal platform in the most popular city of the World! Give it a go!