Up till last elections, not even a single politician or political parties from Tamil Nadu were active on Social Media. The digital scenario looked completely deserted. National parties like BJP, AAP, and Congress had been actively using Social Media in their election campaigns. Earlier, the social media crowd in India used to praise the political […] 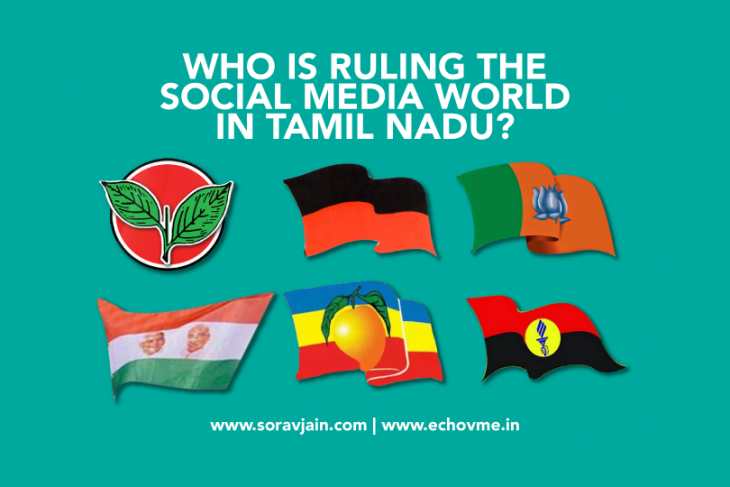 Up till last elections, not even a single politician or political parties from Tamil Nadu were active on Social Media. The digital scenario looked completely deserted. National parties like BJP, AAP, and Congress had been actively using Social Media in their election campaigns. Earlier, the social media crowd in India used to praise the political campaign developments on social networking sites by Obama but the focus has now shifted to Narendra Modi. The way Narendra Modi, Prime Minister of India has used Social Media to influence people is by creating campaigns like #DigitalIndia, #CleanIndiaChallenge (tagging celebrities to take up the challenge), #StartupIndia #StandupIndia and thereby insisted to the youth to use Social Media creatively – Shri. Narendra Modi has been a trendsetter, in short.

Nationally, parties are become increasingly aware of the scenario. There was news few years back which spoke about Rahul Gandhi organizing a session on Social Media for the party members. There are always hashtag fights between AAP, BJP and Congress with #PappuGandhi, #FekuModi and hundreds of such hashtags becoming trending topics of the country.

Politicians in Tamil Nadu on the other hand are yet not digitally savvy! Their IT wings have just started to use Social Media and there is an increase in the level of activities as the elections are near by. Here is a brief overview of the current state of Social Media usage by Tamil Nadu Politicians or political parties: 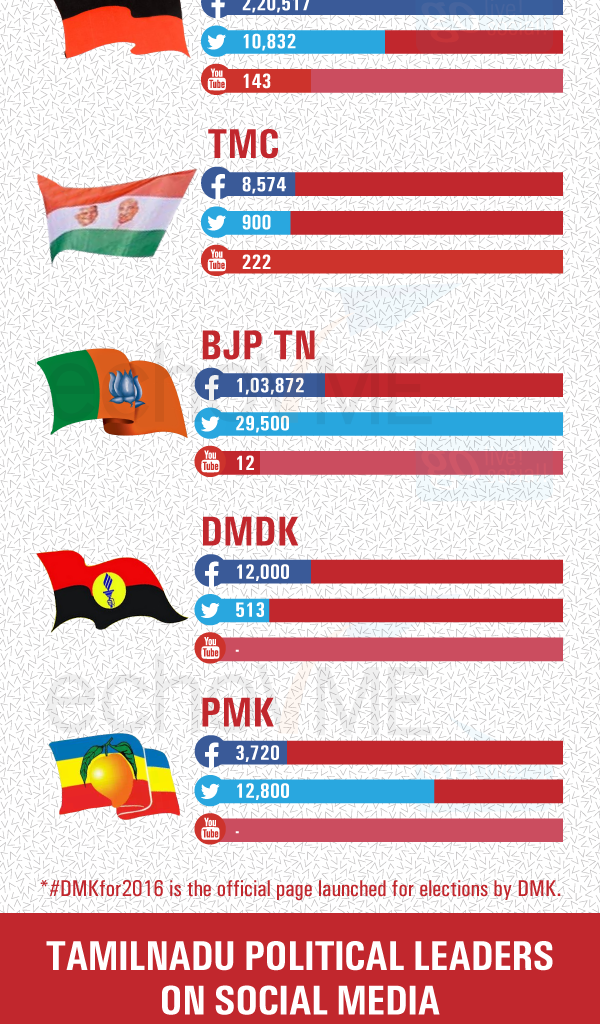 Currently in Tamil Nadu there are close to about 11 Million Facebook users of which about 8.4 Million are male users and about 2.6 million are female users. They are in the age group 18 to 65+. On Twitter there are about 8,77,000 people from Tamil Nadu of which 6,85,000 are male and 62,000 are female Twitter users (as per the Facebook and Twitter ads dashboard, audience targeting section which gives accurate data)

1. All India Anna Dravida Munnetra Kazhagam (AIADMK): AIADMK, the current ruling party is active with about 1,94,000 likes on the Facebook page and about 6-8 posts are posted everyday in Tamil language. Looks like they are currently running a Like campaign advertisement as there is a drastic increase in the likes. The AIADMK official Twitter channel has made about 2895 tweets with 12400 followers. The tweets are made both in English and Tamil. The AIADMK party has been consistent on YouTube with about 100+ videos uploaded and 633 subscribers overall. AIADMK has a website which is not responsive but connects all their social media channels through the icons at the bottom of the page.

The party leader Jayalalitha is not available on any Facebook / Twitter account. However, there are many parody accounts of the party leader (they are either maintained by fans or by random people). There is also a Wikipedia page on Facebook of the party leader with about 1,12,752 likes. If required, the party can claim this and convert it into their official page. There are various other unofficial pages with 70,000 + 41,000 + 5,900 likes. Party should officially claim these and merge with the official channel.

2. Desiya Murpokku Dravida Kazhagam (DMDK): DMDK has a website in Tamil, the bottom right corner of the page has Facebook and Twitter icons leading to their official page. The official Facebook page of the party has about 12,000 Likes only. The content posted are majorly in Tamil with no attractive images. The Twitter icon on the website is leading to a broken link. However, the Twitter channel @DMDKParty2005 has only 513 followers with 517 tweets made by far. The last tweet was made in 2014. Looks like they are not very serious about their Social Media presence! The official Facebook page of the party leader, Vijayakanth has about 60,000 followers with updates made only in Tamil.  YouTube channel is not observed.

3. Dravida Munnetra Kazhagam (DMK): The official website of DMK is in Tamil as well as in English which is a brilliant move. I have been to the Sun Network office quite a few times for Digital Marketing purpose and I have observed that the entire organization is taking a gradual shift towards the digital space. There is a sense of awareness of engaging the audience on Social Media. The old school thoughts are changing! I had met the senior most official during the last assembly elections when the Social Media presence of the party was zero and since then the team internally has taken an intelligent pathway towards their presence on Social Media.

DMK’s website is responsive – this is one of their biggest competitive advantage in the digital space. Their official Facebook page has 27,781 fans currently with content posted in Tamil and their official Twitter handle @arivalayam has about 9,000 followers. They have connected their Facebook page to the Twitter handle and whatever is posted on Facebook gets reflected here. Tweets are not customized for this channel currently.

DMK also has another official page on Facebook with the title ‘DMK for 2016’ which has close to 1,92,732 people.  However,  this page is not connected to their website  currently.  Their twitter channel has 1832 followers. This page has updates made in Tamil and English with a customised logo.

DMK has taken the right path in positioning their old and young leaders on Social Media. Kalignar Karunanidhi’s official Facebook page has 4,74,095 fans on Facebook and 62,000 followers on Twitter (@kalaignar89). Their posts are in Tamil, on an average their posts get about 3,000+ likes and 200+ shares. This also confirms that they have a budget allocated for boosting their posts. Some posts have crossed 1000+ shares. There is a right blend of activity with minimal content on images. Also, they also see photo opportunities like these which they believe can gain momentum.

Another party leader M.K. Stalin is using the Social Media channels in the smartest way possible. He has about 15,17,029 fans on Facebook which is the highest currently and about 61,000 Twitter followers (@mkstalin). There is a post about his day-to-day activities and campaigning. He has close to 10,000 likes on his Facebook posts, about 1000+ shares and 100+ RTs to his tweets – which is a brilliant and also confirms there are huge budgets parked for boosting the posts, running Like campaigns to build the community. The most impressive thing about M.K Stalin’s Social Media presence is – both English and Tamil are equally used to engage the audience.

4. Pattali Makkal Katchi (PMK): The official Pattali Makkal Katchi has close to about 6,711 on their official Facebook channel. They have updates mainly in Tamil. However, the party currently is running a campaign called #TheChennaiWeWant and that’s the core focus about their communication. The party’s core focus has been to promote the party leader for the CM and hence the website ‘www.Anbumani4cm.com’. The website is clean, responsive and supports both Tamil and English language. He is the only political leader in Tamil Nadu who has a blog that discusses topics such as ‘alcohol free Tamil Nadu’, ‘when Chennai drowned’ and few blog posts written exclusively in Tamil.

The official Facebook page of Anbumani Ramadoss has about 101,667 fans and about 7,821 followers on Twitter. These pages promote the campaigns done by him along with social messaging on #TheChennaiWeWant The party leader also ran an influencer campaign inviting Chennai based bloggers and tweeters to live tweet his talk to make the communication reach to the larger audience through the mouth of influencers.

Also, looks like he is the only political candidate in Tamil Nadu who is so technologically advanced that he even has a Mobile Application.

5. Bharatiya Janata Party (BJP): The BJP Tamil Nadu has been very active on social media. They have a responsive website and the content on the website is in Tamil and English. They have their presence on Facebook, Twitter and run a YouTube channel as well. They have 1,03,000 followers on Facebook and their means of communication is a combination of English and Tamil. They have 29,500 followers on Twitter and ensure they are active by tweeting more than 15 tweets in a day. Their content does focus majorly on Narendra Modi and his accomplishments. Their primary communication language over twitter is Tamil. They run a YouTube channel which has 12 subscribers and just 2 videos which were uploaded very recently.

6. Tamil Manila Congress (TMC): The website is extremely responsive. It uses both Tamil and English. Their official Facebook page has about 8,574 likes in total. Their updates are made mainly in Tamil about campaigning and the party leader visits to different places. Twitter is very dormant with hardly 87 tweets and 900 followers. The last tweet was done in the year 2014. Their YouTube channel has about 222 subscribers.

The Election Commission’s social media presence has nothing to boast of but efforts are definitely being made – to engage their audience. They have a total of 153 tweets with 1432 followers and 292 subscribers with 70 videos on their YouTube channel.

They have two Facebook pages however, one titled ‘Special Summary Revision 2016’ and  ‘TNElectionsCEO‘. The former has 9167 Likes and the latter, 2272 Likes.
No campaign or promotion is being run on both the pages though the engagement is higher on the TNElectionsCEO page than the other one.Their content is engaging and obviously aimed at the millennials, catering to the audience in the 18-26 age group. A wise move! Though the entire campaign seems to have begun quite late, only during Pongal 2016.

Their YouTube content is aimed at making change by popular personalities like Kamal Hassan, Vishwanathan Anand, etc among others. But the views are not high enough; with a little bit of budget allocated for promoted, their strategy could have worked wonders!

If the organization could allocate some social media budget, their content could reach to a larger audience!

Predictions & Suggestions for the Coming Months: