My first activity of the day is to look into social media first before reading the newspaper. Saw #anything4jetta trending on twitter, curious I clicked on the trend and realized people are going crazy to win something called ‘jetta’. I later switched over to my The Hindu newspaper and was amused to see the glossy first page with a large size image of Volkswagen.

What will you do for all the new jetta? Was the question asked in the third page of the newspaper. To answer the same you need to Tweet away with the hashtag #anything4jetta. The wittiest and most popular tweet wins daily prizes and wins an entry to the grand prize “The Jetta” itself.

Best part of the ad is: It is well explained, usage of the image supports the title, people are also encouraged to send in an audio tweet, a video tweet or a call in tweet.

I have always supported the fact that Social Media initiatives have to be incorporated with traditional media initiatives. Integration supports and ease the Word of Mouth marketing process.

Here are few examples of the crazy tweets made: 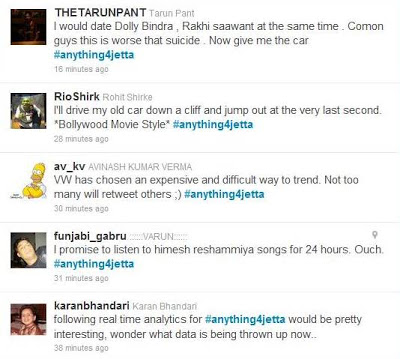 To learn how to participate in the contest, click here: #anything4jetta