I am writing this article on day 2 of the’ #kolaveri’ trending on twitter! This is one of the smartest word of mouth marketing strategies adapted by movies I have seen by far after Paranormal Activity. In less than a week ‘Why this Kolaveri Di’ a popular song sung by Dhanush for his movie ‘3’ directed by his wife Aishwarya starring himself and Shruthi Hassan became sensational, conversational track on Twitter, Facebook, Traditional Media and beyond.  The statistics (As of 22nd November 2011, 6:00 PM) below shows its success:

The song was released on 16th of November 2011 on hearing it first I felt this number would be a TamilNadu sensation but it went beyond what I predicted and is now becoming a national sensation by becoming a twitter trend for 2 consecutive days. 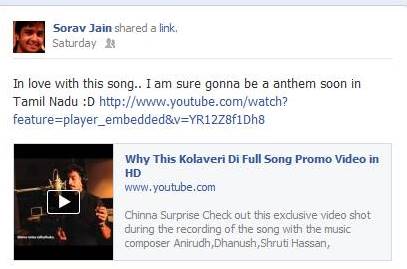