And just like that, with the blink of an eye, more than half of the year has come to an end. But the first half of 2020 was a defining period in the Digital World, with platforms bringing out their best game with a lot of interesting digital marketing updates. From YouTube testing, its new […] 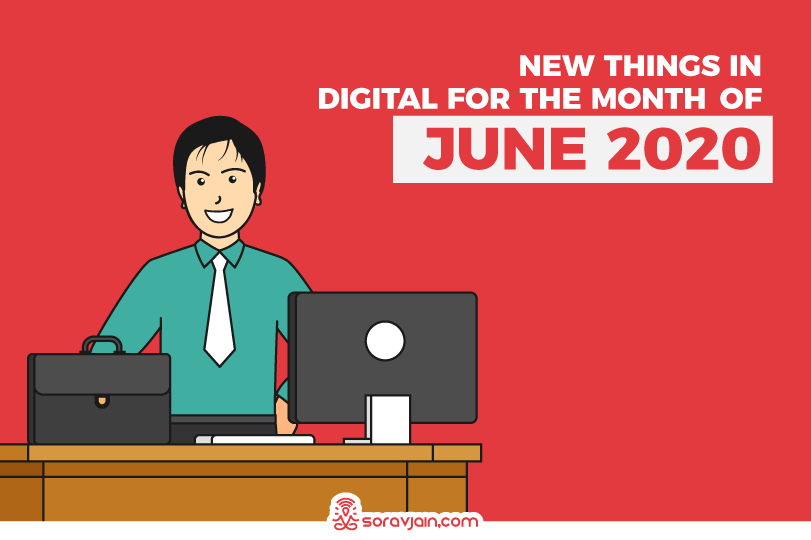 And just like that, with the blink of an eye, more than half of the year has come to an end.

But the first half of 2020 was a defining period in the Digital World, with platforms bringing out their best game with a lot of interesting digital marketing updates.

Here’s the complete list of Digital Marketing updates in June 2020.

And in case you missed last month’s #NewThingsInDigital then click here to read.

1. Google Tests New ‘How To Schema Results’ On Desktop

This format is more of a scaled-down user interface for the other formats we’ve seen on mobile. Google has been busy testing new formats of how to schema over the past couple of months.

Instagram has been working to provide monetization opportunities for IGTV over the last few months.

Starting next week, Instagram is introducing ads on IGTV. IGTV ads will initially appear when people click to watch IGTV videos from previews in their feed. The video ads will be built for mobile and up to 15 seconds long. It will also test various experiences within IGTV ads throughout the year – such as the ability to skip an ad – to make sure the final result works well for people, creators, and advertisers.

3. Instagram is Testing a Double-story Stories Feed with Some Users

Instagram is currently testing a new, double-story Stories feed for some users. Various users have now reported seeing the new Stories display with the updated format appearing for them this week.

4. Twitter is Making it Easier to Add Alt-Text Descriptions to Uploaded Images

Twitter is making it easier for users to add text descriptions to their uploaded images, with a dedicated ‘+ALT’ button displayed on the image itself. Adding descriptions to images is a great way to include everyone in your conversation. These descriptions, aka alt-text, enable folks who use screen readers to interpret images in Tweets.

YouTube is now officially launching its new chapter segmentation display for video clips. With chapters, the video playback timeline will be sectioned into variable chapter lengths, which, when highlighted, expand the specific timeline section and provide a description of what that segment is about.

Facebook’s experimental NPE team has released its sixth new app; this time focused on facilitating phone calls between friends who are up for a chat.

Called CatchUp, the new app is essentially Messenger Rooms for voice calls, providing the capacity to see when your friends are online and up for a voice call, as well as in-progress group chats that you can join.

Twitter has extended its support to the movement and changed its background and its display picture in solidarity with thousands of protestors.

Twitter has changed its bio to “#BlackLivesMatter” and changed its display picture from a blue bird to a black coloured bird.

Bing announced that it pushed out a new feature for its backlinks tool within Bing Webmaster Tools. The new feature is named “similar sites”, and it lets you compare your site’s backlinks to another site.

Facebook’s plan to integrate its messaging apps has taken another small step forward this week, with Instagram testing out a new option that would enable you to view your Messenger messages in your Instagram Direct inbox.

The new ‘Plans’ sticker enables users to set a schedule for an online meet-up, which may also link to Facebook’s new Rooms offering. When you add the Plans sticker, you’ll be able to add a date as well as info on how your Stories viewers can join the meet-up. Your Stories viewers will also be able to see who else, among their friends, has registered interest in the event.

Instagram is launching and testing multiple new features starting today aimed at making the platform a more positive space. The company says that it’s rolling out the ability to delete up to 25 comments at once and also block or restrict multiple accounts at the same time. The company says it’s been testing these features and found that they especially helped people with large followings maintain a “positive environment.

Users of Facebook’s Pages app have reported seeing a new function appear over the weekend, which prompts them to ‘send customized marketing emails’ via their Facebook Page.

14. Google once again tests the “divider” option in search results

Google continues to test having dividers between search results. This has been an on-and-off thing by Google, which is constantly working on making its user interface better. This was spotted and posted on Twitter by Vlad Rappoport.

Google Image Search is testing “previous” and “next” buttons in the image preview section. While there’s always inconsistency in the availability of user interface tweaks across the world, the change was tapped and shared by Shameem Adhikarath on Twitter.

Since the Pride Month celebrations have gone digital due to the ongoing COVID pandemic, Instagram has launched new features to celebrate the LGBTQIA+ representation. Users have widely appreciated the vibrant rainbow coloured hashtags, stickers and AR effects!

In a very impressive move, Google has rolled out the noise cancellation feature to select GSuite customers and is set to improve it over time, based on customer feedback.

18. Facebook to add an option to switch between personal and business accounts on Messenger

Facebook is all set to make handling multiple accounts easier on Messenger! A simple toggle button will enable users to switch between profiles (personal and business) in just one tap!

The new option would provide a display of various lists that you can follow, making it easier to connect with different topics of interest across the platform.

Users will be able to search the listings by topic and follow any streams that they’re interested in.

Google has announced some additional targeting restrictions for housing, credit and employment ads, as it works to eliminate discriminatory use of its advanced ad targeting tools. The new policy will prohibit impacted employment, housing, and credit advertisers from targeting or excluding ads based on gender, age, parental status, marital status, or ZIP Code, in addition to prohibiting personalization based on sensitive categories like race, religion, ethnicity, sexual orientation, national origin or disability.

Facebook is looking to add an extra level of insight to certain search results, with several users reporting a new Knowledge Panel type display for some queries in the main app, with an overview ported from Wikipedia. The new panel displays a summary of key information from Wikipedia, including biographical info (for people) and a link to any official Instagram account, along with a display of related entities.

In a move towards stressing harder on eCommerce, Instagram introduced the “shopping tags” feature in its post captions. On clicking the tag, the user will be directed to the page, where they can browse and shop the featured products.

YouTube has been testing out new features to enhance the advertising experience for businesses. Currently, the platform is trying out the “eCommerce product listing” feature, where it now showcases select products from the catalogue beneath video ads, with a “SHOP NOW” CTA button.

To drive conversions more efficiently and cost-effectively, YouTube has introduced “Video Action Campaigns”, which aim at distributing Ads strategically on the home feed, which will direct the user to the watch page and Google video partners with the appropriate CTA button installed.

25. Now get “Quick Insights” on your Google Ads performance!

Google has introduced an easier way to get insights into ads performances, which can be accessed on the mobile app by a simple Google Search. (Search for “Google ads” or “My ads”)

Keen is seen as a Pinterest competitor to the extent that Tech Pundits continue to compare Google’s new Keen search and social discovery site to Pinterest. Google is famous for not promoting and ultimately shuttering most of these “experiments.”, so its success is yet to be seen.

28. New tools from Google for SMBs to align with shifting consumer behavior

Google is adding a range of new tools to help businesses eliminate the impact of COVID-19. The platform is making it easier to book certain services directly from the search engine to enhance the entire process.

It’s been an exciting month for Twitteratis, with the platform rolling out a range of features which enhance user experience. On a path-breaking innovative step, Twitter has now introduced the concept of “Audio Tweets” (currently available only for iPhone users). This feature enables you to record and add audio snippets to your tweets.

In a move to expand its business messaging tools, Google has now introduced direct messaging on Maps and Search listings. This move is a very positive one, as it now extends its support to small businesses to become more reachable. According to Google, “Business Messages provide brands a comprehensive messaging solution across Android devices, and through Maps on iOS.”

YouTube rolls out the “shorts” option, thereby testing the feature of recording multiple clips directly in the mobile app. The clips recorded can be uploaded as one single video on the channel – YouTube will merge the videos into one and render it for you. There’s a 15-second time limit to this feature, giving out serious TikTok vibes!

Instagram has now launched “Reels”, its TikTok clone (which was initially available only to users in Brazil) in France and Germany. The feature lets users record 15-second clips that can be set to music and other audio. The platform also has a dedicated space for Reels on the users’ profile. It is now discoverable on Explore (for public profiles) enabling users to share their Reels with a new audience.

Attention! TikTok has now introduced the TikTok for Business option, which lets businesses run ad campaigns! The platform includes tips, notes and links to other TikTok tools, like its Creator Marketplace and its self-serve ad platform, which is currently available in limited regions only. This feature enables businesses to reach and engage with a broader TikTok audience.

In the long list of tests Google has been running to enhance user-experience, the Search Engine tested new fonts for its search results. The change was noticed by Twitteratis who took to the platform to share screenshots of what they saw on the search listing!

Star-rich results on Google appear with just one star, and the rating value expressed in numerals!

Google recently added an exclusive “Service Update” section, which provides searchers with updates about changes to business hours or services, like dine-in or curbside and takeout options for restaurants, with regards to COVID-19.